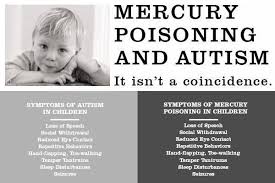 A search of several databases up to June 2017 to find case-control studies evaluating the concentration of total mercury in different tissues of ASD patients and comparing them to the healthy subjects (control group) was done.

The mercury level in urine was not significantly different between ASD patients and healthy subjects.

The results of the current meta-analysis revealed that mercury is an important causal factor in the etiology of ASD. It seems that the detoxification and excretory mechanisms are impaired in ASD patients which lead to accumulation of mercury in the body.