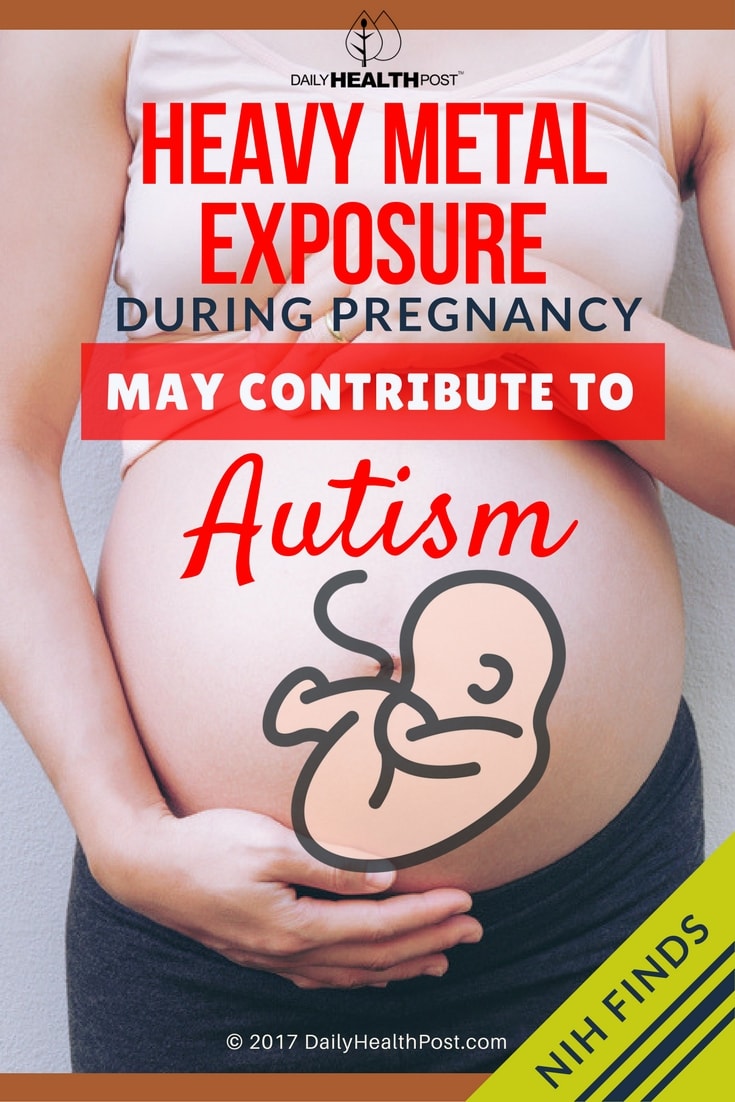 Scientists are still not certain what causes autism, but certain environmental factors can play an important role. One of these factors is HEAVY METALS. Indeed, Heavy Metal Exposure During Pregnancy has been found to one of the causative factors of autism.

It is estimated by the Centers for Disease Control and Prevention (CDC), that as many as 1 in 68 children in the United States have autism spectrum disorder (ASD).

This new research was led by Manish Arora, Ph.D., an environmental scientist and dentist at the Icahn School of Medicine at Mount Sinai in New York City, NY, and the findings were published in the journal Nature Communications.

Dr. Arora explains that there have been previous studies that has looked at the relationship of toxic metals and the risk of developing ASD, but these were limited by approximating the level of toxic metals in the blood before the children developed ASD. In addition, these past studies did not account for genetic factors.

Dr. Arora used a new method by looking at naturally shed baby teeth. Now it is possible to get information that goes as far back as a baby’s prenatal life. And by studying twins, Prof. Arora and colleagues were able to separate genetic influences from environmental ones.

To determine how much metal the babies’ bodies contained before and after birth, the researchers used lasers to extract specific layers of dentine and analyze the growth rings on the babies’ teeth.

Just like we can tell the age of trees from their growth rings, we can do the same with teeth as teeth also have growth rings that can determine the age.

The researchers were trying to determine the levels of lead and its exposure during the different developmental stages, using the growth dentine layers. Prof. Arora and his team had carried out similar research before.

“We think autism begins very early, most likely in the womb, and research suggests that our environment can increase a child’s risk. But by the time children are diagnosed at age 3 or 4, it’s hard to go back and know what the moms were exposed to. With baby teeth, we can actually do that.”

The researchers took a sample of 32 pairs of twins, as well as 12 individuals from twin pairs. The scientists were able to compare tooth development patterns and metal concentrations in pairs of twins in which only one twin had ASD, in twins that both had the disorder, and in pairs in which neither of the twins had ASD.

Heavy metals, or body’s ability to process them, may affect ASD risk

The findings are interesting as the children with ASD had higher levels of lead throughout their development, but particularly during the period before birth.

Two other minerals seemed to correlate with ASD – these were zinc and manganese. During the prenatal period, children with ASD seemed to have lower levels of both these minerals, even though after birth they may have increased.

The conclusions of the study were that prenatal exposure to heavy metals may influence the chances of developing autism.

“A lot of studies have compared current lead levels in kids that are already diagnosed,” Lawler says. “[But] being able to measure something the children were exposed to long before diagnosis is a major advantage.”

Prof. Arora called the method “a window into our fetal life.” He and his colleagues note, however, that more large-scale studies are needed to replicate and confirm their findings.

It would be difficult to give infants and young babies a medicinal chelator, as these would likely cause many side effects in the baby. So an alternative is to find a good-quality, safe, and gentle heavy metal detox for babies.

Dr. Georgiou is the inventor of such a heavy metal chelator that is in liquid form, contains no alcohol as it is a vegetable glycerin base, is organic and Kosher, and has been used by many parents and health practitioners who have given it to ASD children.

It is best combined with LAVAGE which consists of several wild-crafted herbs that help to eliminate the heavy metals by opening up the detoxification channels such as the liver, kidneys, and lymphatics.

It can also be combined with CHLORELLA, which binds to heavy metals when they are outside the cell, therefore again helping in their elimination.

This has now been called Dr. Georgiou’s Heavy Metal Detox Protocol and you can read more about it HERE.

*Disclaimer Notice: Our statements have not been evaluated by the Food and Drug Administration. These products are not intended to diagnose, treat, cure, or prevent any diseases.

Mercury Increases in the Body when Chewing Gum