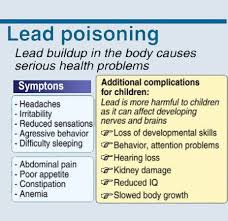 Lead has slowly been decreasing in the environment and in our food and water in the last 20 years or so. It initially increased during the Industrial Revolution and when leaded petrol was introduced. Studies have also confirmed that the level of lead in the blood of children and adults has also increased in the last 20 or so years. Learn how to use a Natural Lead Detox to get rid of lead and other heavy metals naturally.

Most lead today can be taken into the body through food (65%), water (20%) and air (15%). Foods such as vegetables, fruit, cereal products, seafood, soft drinks and some wines may contain significant amounts of lead, as may cigarette smoking.

However, toxicologists have found that even low-level exposure could also have subtle effects on the intellectual development of infants and children, which may also affect their behaviour. Children absorb lead easier than adults and eliminate it with more difficulty.

Lead can remain stored in the body for decades and has a natural affinity for the bones and nervous system. It can cause anaemia, small increases in blood pressure, as well as affecting cognitive and motor functioning. Higher levels in both men and women can affect reproduction as well as being an underlying cause for male impotence.

In addition, lead can cause various symptoms in children such as:

In adults, there are other symptoms including:

Apart from using intravenous chelation therapies, there is not much that can be offered by the medical profession for the ongoing detoxification of low-level exposure of lead. However, there is now a scientifically tested natural formulation that has been shown to effectively eliminate lead and can be used by children, adults and pets. This product is called HMD® and can be found at www.detoxmetals.com

It is best to use the Ultimate Detox Pack in order to benefit from the drainage herbs provided in this pack.