There are a number of reports in the literature that discuss the natural heavy metal chelation properties of various natural substances[1-7]. Many of these have never been tested systematically using the “gold standard” methodology of the double-blind, placebo controlled trial.

Our research group were commissioned by a Russian metal foundry to examine the chelating effects of these natural heavy metal chelators, and attempt to identify a natural compound that would be effective at chelating a number of toxic metals from Russian metal foundry workers. The HMD™ formulation that came out of the 3-year research study is a truly natural heavy metal detox formulation.

This was a randomised, double-blind, placebo controlled trial with 350 metal foundry workers using a number of natural heavy metal chelators purported in the literature to chelate heavy metals. Adult males aged 18 – 60 years old were randomly allocated to various groups taking a number of natural substances to determine their chelating potential for heavy metals. Each of these groups consisted of a control as well as an experimental group. ICP-MS pre- and post- analysis of urine, blood and hair samples was carried out over a 3-year period.

This trial was designed to find the best natural compound that can be safely used for chelating men working in environments that are toxic with heavy metals. If successful, this researched natural heavy metal chelators may play a significant role in the treatment, prevention and general well-being of people working in toxic environments such as metal foundries and other industries with toxic by-products in the environment.

Environmental pollution is very prominent in point-source areas such as mining, foundries and smelters, and other metal-based industrial operations[8].

Over a period of three years, a number of natural substances were tested using double blind, placebo controlled trials. Over this period, natural compounds were identified that could safely and effectively chelate heavy metals from people that had accumulated high levels of these metals from their working environment.

Pre and post urine and faeces tests were conducted on all these natural compounds using ICP-MS spectrometry[9].

The research study involved the participation of a group of medical doctors from a local Russian hospital who also formed the ethics committee. There were also a group of analytical chemists from the plant, a group of nurses, translators, secretaries, administrators and other experts in analytical chemistry that took part in the research over the three-year period.

All subject participation was on a voluntary basis, each person signed a Consent Form, which had clear criteria for participation in the research. There was a sample of 347 men, aged between 18 – 60 years old that took part in all the trials.

In order to initially determine the levels of toxicity and the specific heavy metals that were common to the metal foundry, a convenient and cost-effective screening method was used known as Tissue Hair Mineral Analysis (THMA). [10]   Of the total number of  over 2,000 employees from the metallurgical smelting plants (most toxic areas), a random sample of 374 (18.7%) were chosen to undergo a Tissue Hair Mineral Analysis (THMA) [11] at a reputable laboratory in the USA.

Pubic hair was chosen as this is less exposed to environmental pollution from the plant and was sent to the laboratory and analysed for 8 different types of heavy metals, namely Antimony (Sb), Uranium (U), Arsenic (As), Beryllium (Be), Mercury (Hg), Cadmium (Cd), Lead (Pb) and Aluminium (Al). There were also a further 15 minerals analysed.

The four main metals that were common to all the workers were antimony (Sb), arsenic (As), cadmium (Cd) and lead (Pb), which were at very high levels. These metals were the ones chosen for further study, as they were the main by-products of the metal foundry’s manufacturing process. Mercury was not really an issue as Russians do not use amalgam fillings, but gold alloys, and seldom eat fish.

The research design was a double blind, placebo-controlled study – neither did participants, researchers nor the analytical chemists doing the spectrometry analysis

know which treatment protocol each participant belonged to. The coding was stored in the coordinators safe until it was time to interpret the statistical data.

A baseline pre-urine sample was collected over 24 hours in a 2-litre plastic container designed for such urine collection. After mixing thoroughly, a 50 ml sample of this urine was collected and sent to certified laboratories in the USA for testing using ICP-MS analysis. The subject was then given another 2 litre container and began taking the natural substance that was being tested. This they took three times daily in the dosages stated below, while continuing to collect all urine over 24 hours. A further post-sample was sent to the same laboratory and the levels of the pre- and post-urine samples were compared.

In order to determine the route of elimination (biliary vs urinary), the same was done for each subject but pre- and post-faeces samples were collected and sent to the same laboratory – this was done over 48 hours while taking the natural substance in question, due to the slower transit time. Pre and post levels of faeces samples were also compared and statistically analysed.

Immediately after the trials, blood samples were taken from all the participants and analysed for a number of liver and kidney function tests to determine whether the detoxification organs were being stressed with the natural chelating compounds used.

All the participants were given time off work during the trials as it was important for them not to continue being exposed to the heavy metals during the pre-post testing period.

There were however two workers in the sample who continued working during the trial due to work pressures.

After the baseline urine samples were collected for 24 hours as well as the faeces, as soon as the need arose, each participant was given their precise detoxification remedy, which they began to take three times per day (see Treatment Protocols below).

All participants took certified metal-free, high-grade cell-decimated Chlorella tablets[12-16] (500 mg x 3 daily), in order to prevent the reabsorption of metals from the gut due to the high levels of toxic metals that were measured in these workers. This was an added precaution to prevent any adverse reactions.

The placebo group also took this chlorella. The results indicated that the chlorella by itself was not chelating metals per se. High impact jet-spray drying that pulverizes the algae wall breaks the Chlorella cell walls, making it into cell-decimated chlorella. [17] The pulverizing helps to increase absorption of its vital nutrients.

Furthermore, all the homeopathic homaccords used in the study were prepared by a reputable homeopathic pharmacy in the UK.

Statistical analysis was conducted using the Statistical Package for the Social Sciences (SPSS) [18]. A biostatistician was responsible for running all the analyses using ANOVA, Pearson’s correlation coefficients and other descriptive statistics.

Over the three years there were a number of trials conducted using 14 different natural substances and combinations of these, that the literature purported as being effective chelators. All the 374 workers that were initially screened using the THMA took part in at least one of these trials. The various substances and their combinations tested in the trials consisted of the following – the dosages of each are mentioned in the results section – 5.1 below:

5.1 Summary of the Results of the Natural Compounds Tested

The data presented in Table 1 (N=220) shows the success (√) or failure (×) of these trials using the above-named natural substances. Success meant that there was an increase in the specific metal in the post-testing, compared to baseline for the group being tested as a whole. To be considered a “successful” remedy (√) it must have shown the ability to eliminate metals in ALL the people involved in the particular trial.

The results of the various trials over the 3-year period can be summarized below – there was a total of 220 people that took place in these trials:

The only compound that was effective at mobilizing and eliminating all metals was HMD™, a proprietary synergistic blend of three natural ingredients in liquid form that are taken orally:

Table 2 shows the summarised results of a number of different trials over a three-year period. The mean percentage increase of heavy metals after provocation with the HMD™ is compared with the elimination with placebo (a highly diluted chlorella tincture). The post-provocation urine samples were collected after 24 hours and the post-provocation faeces samples after 48 hours due to the slower transit time – “U” denotes the Urine samples and “F” the Faeces samples.

Apart from the 4 initial heavy metals tested, other metals such as Nickel (Ni), Bismuth (Bi), Uranium (U) and Mercury (Hg) were also tested in these trials, but only using pre- and post urine samples (not faeces).

Table 2 Test Results of the Natural Compound HMD™ – number of trials over a 3-year period
U = Urine; F = Faeces

All post sample measures were statistically significantly higher than the baseline measures for all metals, indicating that HMD™ was eliminating all the metals tested which included As, Pb, Cd, Sb, Ni, Bi, U and Hg. Table 2 also shows that the predominant route of excretion for all metals is via the urine, giving the added advantage of decreasing the possibility of re-absorption through the bowel.

Interestingly, when these individual components were tested separately, there was negligible chelating activity, but when they were combined together there was a

that helped chelate and eliminate all the metals tested through the urinary route as opposed to the biliary route. This has added advantages as reabsorption of metals from the gut are prevented.

Subsequent to the initial research, there was a separate trial for mercury alone that was conducted using 56 subjects. All urine analyses were conducted on a mercury-dedicated

PSA Atomic Fluorescence Spectrometer measuring at levels of parts per billion. The 56 subjects participated in a 24-hour provocation trial using HMD™ at dosages of 40, 50 and 60 drops throughout the day. Initial six hour baseline pre-urine samples were collected, along with a 24-hour collection for the post-urine sample.

Table 3. Results of the HMD™ Testing in Urine for Mercury (N=56)

During the HMD™ research trials, blood samples were taken from a small group of people (N=16) to determine the effects of the HMD™ provocation on liver and kidney function tests. The average percentage increase was calculated from the pre-and post sample figures of these biochemical tests.

Table 4 shows the percentage increase of these biochemical parameters in the post-serum samples, compared to the baseline serum sample before HMD™ was taken. Overall, there are small average increases in creatinine, bilirubin, urea, ALT and AST, but nothing that surpassed pathological parameters. The minimum and maximum levels are also shown, but generally the higher levels were present in one individual only.

Table 4. Details of the Liver and Kidney Function Tests

It can be concluded from these tests that HMD™ is a “gentle chelator” that does not adversely affect liver and kidney function tests and is tolerable by most adults.

This brief presentation of this three year research study to determine a cost-effective and safe metal chelator that can be used on a mass scale in metal foundries, as well as by the general population, has clearly shown that HMD™ has proven to be an effective natural chelator for As, Pb, Cd, Sb, Ni, Bi, U and Hg in all the trials conducted.

Dr Georgiou Georgiou, Ph.D.,N.D has been an active clinician for over 35 years, and Founder/Director of the Da Vinci Holistic Health Center (www.naturaltherapycenter.com) which specializes in the treatment of chronic diseases.  He is also the principal investigator of this HMD™ research as well as Director of the Da Vinci BioSciences Research Center, in Larnaca, Cyprus where he conducts laboratory and clinical research on heavy metals, novel ways of eradicating infectious diseases as well as Biophysics research. Email: [email protected]

See other articles on toxicity 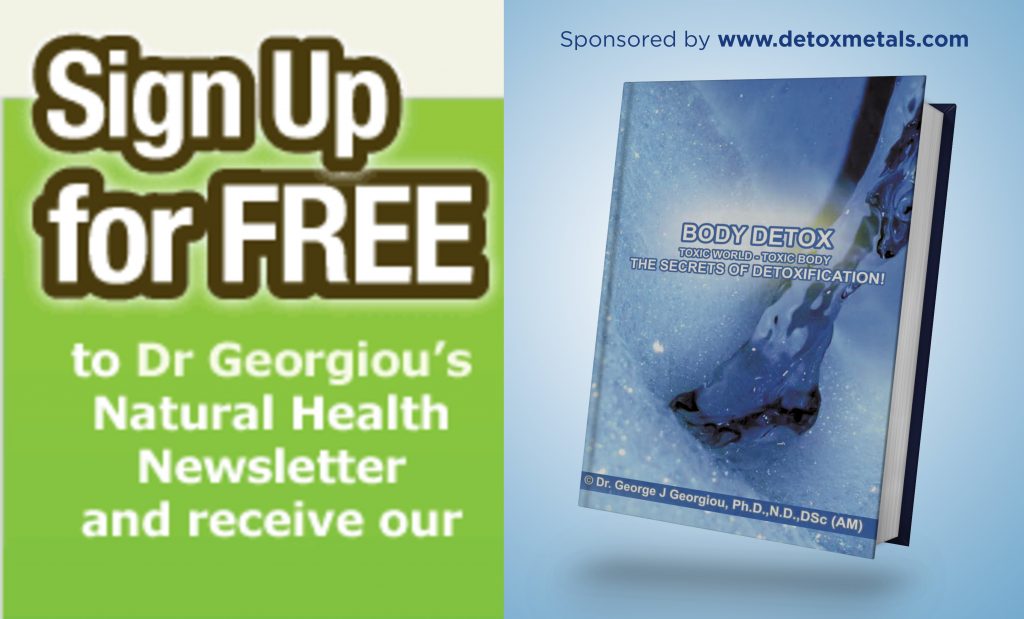 © GMG Da Vinci Health Ltd. All Rights Reserved, 2022
Menu
Select the fields to be shown. Others will be hidden. Drag and drop to rearrange the order.
Click outside to hide the compare bar
Compare