ADRIAN (SPAIN): ‘I AM FEELING BETTER WITH EVERY DECREASE IN MERCURY’ SEVERE DEPRESSION AND ANXIETY

In June 2012 I went to see a dentist for a general check up. He told me I needed a filling in a tooth to which I agreed, however I didn’t realize the tooth had a mercury filling. The dentist gave me no indication that the tooth had a mercury filling and went about drilling into the filling without any protection or precautions for the mercury being absorbed by myself. Following that appointment I began to get extremely sick, mentally. I began having massive depression and anxiety, so severe that I had to sleep locked in a room on my own without any sharp instruments because I was worried I would harm myself or someone else. The thoughts I was getting were horrific and I couldn’t see how I could live thinking like that. It was like my brain was cramping and I was getting horrible thoughts that I just could not control. It was a real battle just to get through one day. In fact I would have to plan the entire day and make sure I had something to do at every stage of day just to help me get through the day. I went to the doctor to try to find the problem. The doctor sent me for blood tests, an epilepsy test, a brain MRI, a cat scan of my head. I went to a maxofacial specialist, an ear nose and throat specialist and a psychiatrist. None of the tests or specialists could find anything so the doctor prescribed me high dose Vitamin B told me to exercise and sent me home. That night I took a vitamin B tablet and woke up at 1:00 feeling like I was dying. Apparently Vitamin B turns mercury into its lethal form of mercury so I stopped taking that immediately. As a person who had always taken extreme care of my health, I couldn’t believe how sick I was and plenty of people were telling me that it was just stress. I knew it wasn’t stress and with the doctor being ineffective I kept trying to find out why I was so sick. I took food tolerance tests, hormone tests, urine metal tests, allergy tests etc. I eventually sent some hair away for analysis and it came back that I had quite high levels of mercury. That is when things began to click and I realized mercury was the thing that was making me so sick. As it is super toxic. 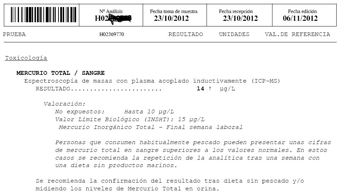 At this point I did some research and found the natural detoxification product HMD™ which had been well researched and it looked quite impressive. My only concern was its ability to get the mercury out of the brain tissue as all my research suggested that mercury had a strong affinity for brain tissue and my brain was going crazy so I desperately needed that fixed. While I couldn’t find any strong research evidence on the ability of HMD™ to remove mercury from brain tissue, Dr George from HMD™ suggested that this may have been the case from anecdotal evidence as his patients experienced better mental health as the HMD™ lowered their mercury levels.

That was good enough for me as I was in all sorts of distress. So my action plan was to remove all mercury fillings safely. I found a dentist that did the procedure safely and had all my 4 mercury fillings removed. This also resulted in the removal of a tooth as the bacteria had gotten into the root and my research on root canal therapy showed it to be quite dangerous in the long term. My new dentist did not want to remove the fillings as he said it was more dangerous to take them out then to leave them in but again I had a very strong opinion and proof that I was having issues with mercury. The mercury filling removal was completed by December 2012.

I purchased HMD™ and began taking it immediately along with some natural supplements that I read should help with the detoxification and elimination of mercury from my body. I began with 30 drops 3 times per day with the HMD™ but I seemed to be getting sicker so on the advice of the HMD™ team I backed off to 5 drops 3 times a day. I added some extra drops per day as I felt my body was coping with the mercury removal. I tried to get the dosage up to the recommended 45 drops 3 times per day but every time I went over 30 drops 3 times a day I started to feel sick so I stuck with the 30 drops 3 times per day because my body was tolerating that. I knew it would take longer for the mercury to clear but I didn’t want to feel so sick all the time. The issue with trying to detox from mercury is that trying to remove it too quickly actually results in the mercury being reabsorbed and re-poisoning you. I realized that was why I was feeling so sick on the higher doses of HMD™ so I kept to the 30 drops 3 times per day. The other supplements I used were vitamin C, Vitamin E, Chlorella, zinc, magnesium and garlic as my research suggested these could help. I tried other supplements along the way but if I felt like they weren’t helping I would stop taking them and over time I remained with the supplements I have mentioned.

As of April 2013 my mercury had dropped to 9 units

So I was detoxing about 1 unit per month which was nice and steady and I was happy as I was gradually feeling better and thinking better. Still my thoughts weren’t all clear and happy yet. As of June 2013 I was still at 9 units of mercury in my blood which meant it hadn’t dropped in 3 months. I thought this was odd and I was disappointed but I kept on pushing on. 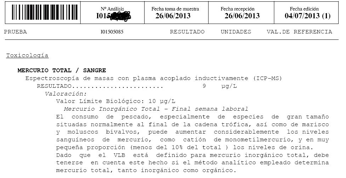 As of August 2013 my blood mercury had dropped to 7 units and the mercury was clearing again and with every decrease in blood mercury I was feeling better in the body and head. I was now beginning to function more like normal but still getting the odd strange thought although they weren’t nearly as strong. Yes I was definitely improving.

I continued to research mercury removal and decided to take the HMD™ on a 4 on 3 day off cycle per week but still taking only 30 drops 3 times per day because anything higher still makes me feel sick. I am also continuing to take the supplements. As of November 2013 my blood mercury is down to 4 units and I am noticing that I am feeling better with every decrease in mercury. 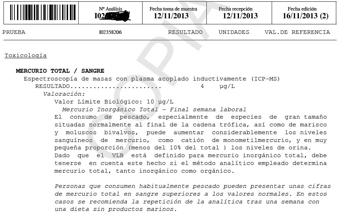 It is now that I lift the HMD™ dosage to 40 drops 3 times a day as the increase I can tolerate well. I am hoping in the next 3 to 4 months I will be mercury free. I will continue to detox with HMD™ and update this article as I progress.